…. At least, I think it’s worthwhile – there are a lot more applications available now compared with when the first jailbreak was available & Installer is available (though it’s a beta version and the majority of good applications are currently in Cydia) 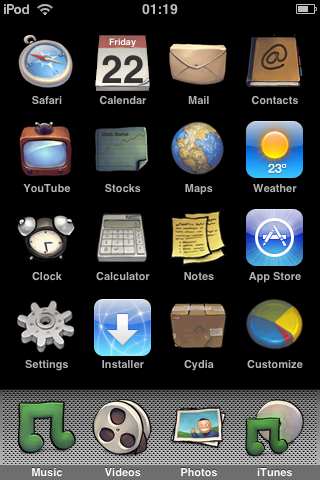 What sold it for me is that there are now ways to theme your iPhone / iPod Touch like SMBPrefs offered in the past.

There are two theming apps that work, one which many jailbreaker’s will be familiar with: customize and the other; Winterboard.

Customize is definately the more fully featured of the two offering the ability to theme the home screen as well as change sounds, message text throughout the software and much much more.

Also, MobileTerminal works pretty well; just as well as it did in 1.1.4 as far as I can tell and it comes in really handy if you know what to do with it. 😉 Command-line FTW!

Just get Touchpad Pro & VNSea working and I’ll be content.