Holy Shit! Wow. That was an EPIC 82 minutes of TV. Also, lots of WTF’s

Some Lots of Spoilers follow!….Locke was the one in the coffin!!!!!

Jin did, most likely die! 😦

Awesome beginning to that part, I thought… just a straight transition from the ‘previously’ into new content.

I really didn’t see Locke leaving the island, but obviously whatever happens after the 6 leave is really bad. I think I’m gonna need to rewatch this episode; especially with the knowledge that Jeremy Bentham is Locke.

What will happen to those that remained on the island e.g. Sawyer, Juliet…. (are there any others?).

Presumably, Ben moved the island physically as it did disappear right out from under the chopper. Though this episode added to the confusion regarding time-fuckery.

How did Miles (ghostbuster dude :P) know that Charlotte was born on the island? Why did he choose to stay on the island. Charlotte I can kinda understand but not Miles.

Nice sacrifice by Sawyer; what he whispered to Kate was obviously him asking Kate to do the thing that annoyed Jack in the not-so-distant future.

I don’t really understand why Ben can’t come back to the island seeing as he’s the one who moved it. I kinda get as to why he had to leave though; he had to turn the frozen donkey wheel to move the island and that resulted in him teleporting into the desert and into the future!

The call Kate received in her ‘dream’ was pretty interesting. I fully expected it to be saying something and it was. Backwards. When played forward it says “The island needs you. You have to go back before it’s too late” [hear it here].

I wonder who Claire was telling Kate not to take back to the island; Locke, or perhaps more likely Aaron?

Who should Desmond prevent from finding him? I’m sure I’m not alone in hoping that Jack does get to see Desmond ‘in another life, brotha’ 🙂

On that matter then, these will resume at an un-announced date in 2009. Farewell.

Oh and was it just me hoping that they didn’t blue-ball us with finding out who was in the coffin? I would have been annoyed if we got as close and didn’t find out; I’m glad we did. 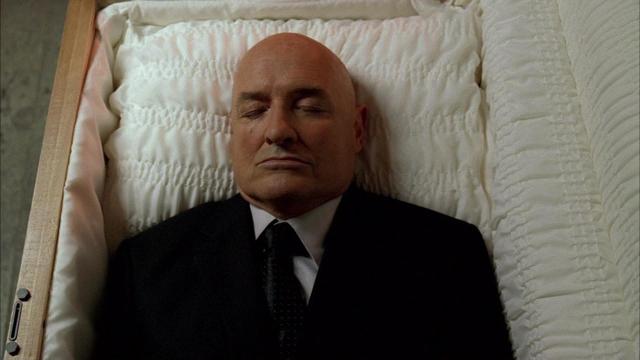 Edit: Ben says “we’re gonna have to bring him too”… Does that mean Ben is going back as well?

Oh yer and Hoffs / Drawler (the name of the funeral parlor) is an anagram of Flash Forward; wasn’t it nice of the Lost writers / producers to tell us that last year?