A pretty good episode, this… 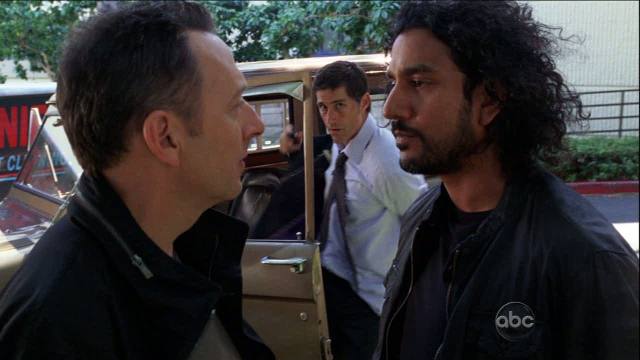 I’m glad I hadn’t noticed that Daniel Dae Kim’s [Jin’s] name had appeared at the beginning of the show because I really didn’t see that coming unlike last season when Michael turned up. My reaction was something along the lines of “Holy Fuck” when I saw Jin.

It’s good that he’s still in the show. He’s a nice character. And he’s returned 16 years in the past!

As for what else went down in this episode…..

I think they pretty much confirmed that Charlotte was born on the island. But they also hinted that Ghost-buster dude Miles had at very least been on the island before.

My suspicions from the premiere was that we would know who Dr Marvin Candle’s baby was in the future…. Chances are high that it’s Miles. Don’t ya think?

Charlotte just waking up was weird. Not what I expected at all. Perhaps there’s more to come… And that it’ll now happen to Miles and Juliet.

Who was shooting at Locke, Juliet, Daniel etc.,? Based on the water bottle found on the beach, this is after the Oceanic 6 had returned to the island (google Ajira Airways if you want to know why).

The name on the van that Ben was driving was CANTON-RAINIER….. This is an anagram for Reincarnation — Referring to Locke?

What’s Ben up to? At first I thought he had hired the lawyer to go after Kate in order to get her to have a reason to want to run away [what better place than the island? :p ], but the fact that he told her that he was responsible negated that possibility. So I don’t really see why he was doing it.

Sun killing Ben? Likely? Me thinks not. But it should be interesting — if she did, would she be able to get back to the island? Not that she want’s to at the moment, but we know that Jin’s there!

At the moment it looks as though the Oceanic 6 will be able to get back to the island pretty soon — they’re all together other than Hurley, and it seems as though Ben will have that sorted; he does always have a plan, after all 🙂

Till next week then…

Oh yeah…. What exactly was the episode title “The Little Prince” referring to? It wasn’t particularly clear.