Using Steam on a Mac with a case-sensitive drive

It can be done, but there’s a little hassle involved:

If you just try running it from your Applications folder, you’ll most likely see this, which fortunately isn’t as big a problem as it is with Photoshop

Ok, so, since I don’t have any case-insensitive Volumes, I’m gonna create a disk image using Disk Utility; if you do have a case-insensitive volume, you may be able to substitute that for the image. 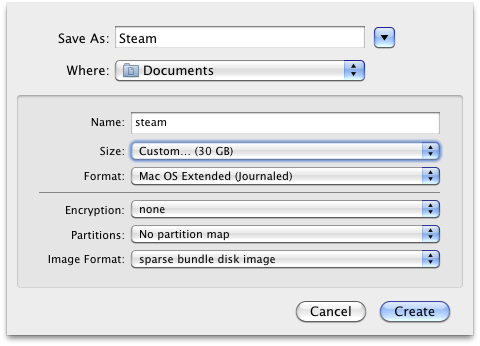 Choose where to save the disk image, give it a lowercase name (and note what it is for later), set the image format to “sparse bundle disk image” and Partitions to “No partition map”.
As for the size — I set it to 30GB; Portal is 5GB, so I don’t think it’s too large. Importantly though, even though I set it to 3oGB, it only takes up the amount of space as the files inside it. The size is the maximum it could hold. (After creating it, with no files in, it was only 130MB.)

Ensure that the image you created earlier is mounted (the name will be shown on the left of a Finder window).
Copy the Steam app into the image you created.
Open up Terminal (it too is in the Utilities folder /Applications/Utilities/Terminal)
Remember that name you set earlier? Replace /Volumes/steam below with /Volumes/(your-chosen-name)
Issue these commands, pressing return after each one. You should be able to copy and paste each line.

The last one will require you to enter your password. Incidentally, I know this is a horrible solution… but until they adapt it’ll have to do.

If all went well, you should be able to run the Steam app from your disk image now. So far, I’ve tried Portal and it seems to work fine. Crucially, it runs fine and you can load/save 🙂

Oh, and you can drag the volume off of the Finder’s sidebar so you don’t have to see it there if you don’t want.