Breaking Bad – A look-back before the final 8 episodes

Before Sunday night’s new episode of Breaking Bad, let’s review where things are sitting after the first 8 episodes of season 5.

Well, the biggest thing, from the very end of episode 8…  I’m sure you’ve not forgotten this… Hank! Hank knows who he’s been chasing all this time. Heisenberg == Walt.

I’m sure that’ll be a pivotal storyline for the remaining 8 episodes; interestingly though, it’s not the last thing we’ve seen where Walt’s concerned, chronologically. Stepping back a few episodes to the season 5 premiere, we were treated to a glimpse into the future.

Walt, some months ahead

We know this is a few months ahead of when we last see Walt in episode 8, he’s grown his hair back, and he’s just turned 52 — last birthday we saw, 51, he spent with his family.

In this season opening scene, we see Walt at a restaurant, waiting for the gun guy we’ve seen previously. The gun guy turns up and the 2 men exchange money for car keys. Walt assures the gun guy that it won’t cross the border, saying “It’s never leaving town”.

As the gun guy leaves, but before we go outside to see what Walt’s bought, the camera lingers on him coughing a little and then taking some pills. Has the cancer returned?

In episode 8 we see him getting scanned again, but don’t hear about the results. 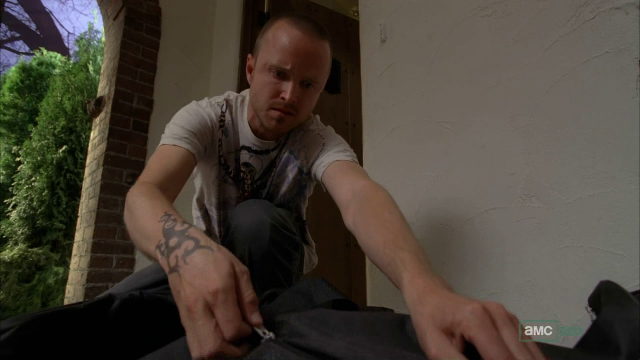 Jesse gets some unexpected, and unwanted cash from Walt

Ok, so other than that, Walt killed Mike(!), but Jesse doesn’t know; Walt told him “he’s gone”, so as far as Jesse knows/assumes, Mike successfully fled the country after the DEA were after him.
In the last scene we have with Jesse, Walt gives him some cash… money that he really doesn’t want — he wants nothing to do with Walt anymore, I get the feeling. 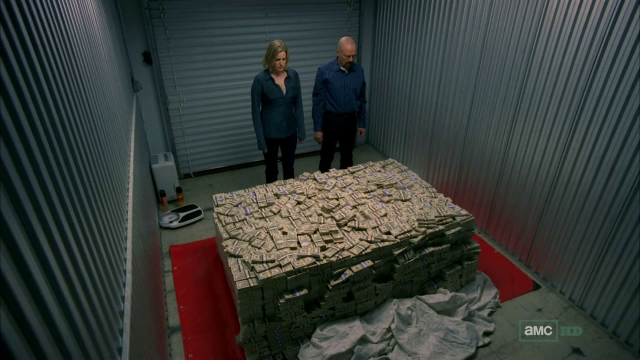 Though supposedly Walt’s out of the business too, after seeing just how much he’s earned, — an un-countable, preposterous amount — enough to take even him aback.

Shortly after this, the family’s back together, and Hank’s figured Walt out.